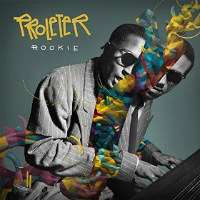 You can expect eight tracks, six of which cut up Charleston-era jazz – one of which six (Throw It Back) features a turn on the mic from established Utah-based emcee, Taskrok. The remaining two cuts consist of an instro of the Taskrok cut and the somewhat incrongruous Cali-funk based Stereosun the latter of which appears to have been included as if to say – ‘yeah I can do this shit too’ – just in case any big stateside emcees are short of a beat for their next magnum opus and just in case you were getting tired of the whole ‘1920s hip-hop from the Big Easy’ vibe of the rest of it.

Trust me though – you won’t get tired of the ‘1920s hip-hop from the Big Easy’ vibe – not that there’s anything wrong with Stereosun either for Proleter knows how to pick a hook and deliver sunshine beats whether he’s reppin’ the present or the best part of 90 years ago. You may find it challenging to pick a favourite though, but if you had to, By The River or earworm Melancholy Baby featuring a sample of a version of the Burnett/ Norton-penned 1912 song of the same name would certainly be contenders. Put this on, close your eyes and imagine it’s sunny, warm and you’re drifting along the shady banks of a bayou. Cop it below…
(Out 30 November on Breaking Mad)

Posted on 30th November 2014 no comments