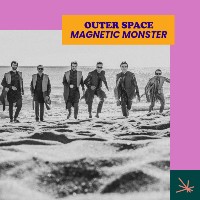 Looks like there’s still time for another digital single from Germany’s Golden Rules label prior to the release of a year’s-worth of digital singles on a big summer vinyl LP funk and soul drop. On this occasion, it’s Outer Space supplying the goods entitled Magnetic Monster and it’s a beast! A beast from outer space? Well a beast from Barcelona at the very least and one with a heavy, heavy afro-funky Budos Band vibe going on to boot. Listening to it, you’ll instantly pick up on the fact that the band are also heavily inspired by the emperor of Ethio-jazz, Mulatu Astatke, as they take you on a psychedelic trip to the heart of darkness.
(Out now on Golden Rules)