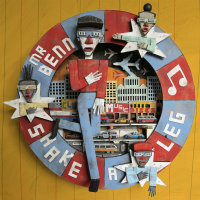 Big up the Bristol Massive! Mr Benn finally comes through with Shake A Leg – an album that’s been ‘soon come’ for so long that it was starting to make even the most generous concept of ‘island time’ look like a mockery. Our man doesn’t disappoint though delivering a scorching eleven track set of varying bashment flavour – damn near any one of which could be a single.

Mr Benn is famed far and wide for his hip-hop reggae hybrid sound and that is certainly present on here – most obviously in the form of Shame with previous collaborators Emskee and Souls Liberation but the only other thing along these lines is Serocee vehicle Rising Star. Far more in evidence is lively dancehall material featuring a who’s who of modern reggae and dancehall vocalists. The most obvious bid for crossover hit comes in the shape of potentially chart-bothering Top Cat vehicle Do The Move. Elsewhere the sound is somewhat grittier on Without A Trace, No More Guns, Work That and Wine Down Low featuring the Ragga Twins, Tenor Fly, MC Zulu and Mad Dog respectively with Eva Lazarus representing for ragga sistas on Pull It too. There’s also a brace of massive reggae tracks (both favourites on the monkeyboxing sound system) – Stand Up featuring Nanci Correia and Know Themself featuring Peppery. All of which just leaves another MB favourite – the massive dancehall skank of the opening (and title) track graced by the buzzsaw larynx of Blackout JA. It might have just missed the St Paul’s carnival but there’s every danger of this running all tings dancehall by the time Notting Hill rolls around. ‘Ear me now!
(Out now on Nice Up! Records)