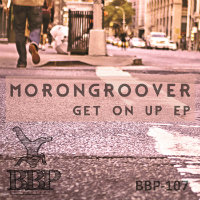 The man with the bravest name in breakbeat returns on Breakbeat Paradise with a cracking four track EP of crunchy party breaks topped with a slew of hip-hop acapellas as the label continues to nurture a non-wobble vibe. Things begin with the title track which provides an appropriately large Miami Bass-ish beat for the Miami bass-ish rap vocal off Klubbheads’ terrible early noughties hard house cut Let The Party Begin, there’s no passin’ by the phatter, slower, funkier Fairy Tales which is topped by no less than The Pharcyde and (popular this month) Lord Tariq’s Deja Vu gets flipped in an uptempo stylee for Uptown Funk. The best has been saved for last however as the phattest beat of all is provided to underpin a rework of a certain recent Large Professor number. All of which means Morongroover gets this week’s official party hip-hop key to the city.
(Out 11 September Juno exclusive; 19 September general release on Breakbeat Paradise Recordings)