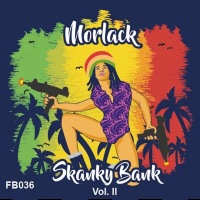 Are you getting the feeling there’s an island influence on the four new cuts from Morlack that comprise Skanky Bank Vol. II? The cover art’s a bit of a giveaway after all, the Funk Blasters’ Betty Davis label logo which seems to have swapped heads, old-school Worzel Gummidge style, (“‘allo Aunt Sally, I’ll just get me rasta ‘ead on”), and the rest of it features palm trees silhouetted against a sky in Jamaican flag colours. Then there’s the music of course. Candy Skank swaps the Snoop original’s boom-clap beat for a bass-heavy digi-dancehall type skank (obviously) while Lorin goes the other way and applies the dancehall vocals of what sounds like a certain Cutty Ranks over dreamy (but still bass-heavy) R&B. The last two tracks Rhythm 20 and Same Feeling maintain the Jamaican influences the same way round though the provenance of the beats is anyone’s guess. They do have a certain go-go vibe though – unsurprisingly because Morlack has form here – what with being the genre’s no. 1 fan outside of the U.S. Poolside party music all the way though. Teaser audio below plus full vids of Candy Skank and Lorin’s Dance – the latter featuring Morlack’s very own dog.  You heard it on MB first.
(Out 5 March on Funk Blasters)

candy skank from Morlack on Vimeo.