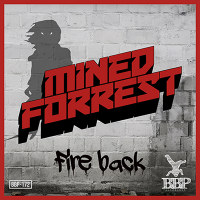 Expect the latest digital release from Breakbeat Paradise in mere days as the label unleashes Mined & Forrest’s Fire Back. And they’re certainly packing some heavy weaponry on this new six-tracker. The title of opener The Big Mama seems to be a nod to sister label Big Fat Mama Beats (started by BBP co-founder Wiccatron) and consists of large, farty-bassed ghetto-funk beats while the Joe Tex-sampling Gimme The Best is an altogether slower, lower slice of breakbeat atmospherics. The title track also continues in this latter vein and features the talents of Kiwi songstress IamLawn as does the dubby skank of Acting Like You Know while the package is rounded off with two remixes. The first of these is one of the opener by Mr Ours – a man clearly determined not to be out ghetto-ed by anyone and the second is Crash Party’s dnb take on Acting Like You Know. So now you know.
(Out now (Juno Exclusive) and 17 January globally on Breakbeat Paradise Recordings)