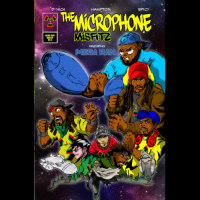 With lunatics running the asylum on both sides of the pond, escaping Babylon has never seemed less likely or more desirable – just as well the Windy City’s Microphone Misfitz continue to fight the good fight with the recently-released Escape From Babylon Vol. 4. Like its two most immediate predecessors, the album features an intro from the one and only Darryl ‘D.M.C.’ Daniels – a credential entirely appropriate since the intro heralds another dope round of funky boom-bap and b-boy business that features Mega Ran, Ras Kass and Cozmo D, among others.

The LP is divided into three more or less equal sections by continuing a motif begun on Vol. 3 with Parts 4, 5 and 6 of Words featuring the wit, wisdom and ire of Mel L (sans beat) a man who kicks off by attacking a culture obsessed with image noting that this leads to a single ominous consequence – making faking the funk the norm. Standing squarely in opposition to such dissembling, the Misfitz’ first track proper features squelchy wah-wah and thumping drums encouraging the listener to Get Naked – at least metaphorically anyway – by being less accepting of bullshit and developing a critical mind. The follow-up also features Mega Ran and employs early 80s arcade-type sounds and a multitude of percussive old-schoolisms to deliver a message about inappropriate bodily proximity on Space Invaders (you can probably see what they did there) and then it’s time for more words from Mel L. The target this time is those who over-react trash-talking, mind you – that’s a sword that cuts both ways which is probably why the hook on next track Triggered notes that, “Everybody’s triggered.” Watch out for the album’s most b-boy track Keep Watching, the human beatbox-powered Family History remix which breaks down the relationship between jazz, blues, R&B, funk, soul, reggae, and hip-hop and monkey favourite – the funk rock n horns riff-driven Power Pen.

Posted on 28th December 2019 no comments