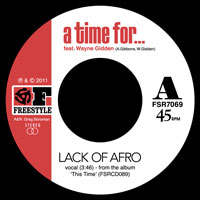 READ Lack Of Afro – This Time album review HERE.
If 6 was 9…if the mountains fell into the sea…if A on this was B…None of those things are so but it is true that Adam ‘Lack Of Afro’ Gibbons’ has actually done something I really like. Unfortunately it’s the B-side though, so I will do my level best to see that Numero Seenko gets its dues right here. It’s not that the Wayne Gidden-featuring A-side, A Time For is bad. Gidden’s Jay Kay meets Marvin Gaye vibe teamed with Gibbons’ sax-and-seventies-piano-powered soul groove is a proper coffee-table/ dinner-party botherer. In fact, anyone currently operating in that sphere should probably realise that it’s a time for taking a regular check over their shoulder if these two team up again. Numero Seenko, on the other hand, sneers at the coffee table since it’s already commanding the dancefloor with a Memphis Soul Stew-sampling, fuck-you smile written all over it’s face. It’s kind of a bit like a missing Fatboy Slim track – if Fatboy Slim had been less cheesy than a Camembert-factory the week after the cleaners went on strike.
(Out 15 August on Freestyle Records)

A Time For…(feat. Wayne Gidden) by Lack Of Afro

Numero Seenko by Lack Of Afro

(PRESS RELEASE)
As a multi-instrumentalist, artist, producer, DJ and in demand remixer, Lack Of Afro (Adam Gibbons) has achieved a startling amount in the few years since his first Freestyle releases. Playing live and DJ-ing across the world, producing and remixing everyone from Tom Jones, The Pharcyde, The New Mastersounds through to Kraak & Smaak.

In 2011, as well as collaborating on an album project with Eddie Roberts of The New Mastersounds, and having also produced and played on the Jazz FM ´Album of The Week´´Colours´, by Freestyle label mate ´Frootful´ Adam somehow found time to create what is, without doubt his strongest album yet ´This Time´.

As an introduction to this eclectic and progressive collection, Freestyle Records is proud to present the simply stunning single ´A Time For…´ which features Wayne Giddens´ smoky vocals on this mellow, sublime soulful outing. An accomplished songwriter, Waynes´ own previous singles,´Whatever I Choose I Lose´ & ´I´ve Changed My Ways´ have both enjoyed heavy rotation on BBC Radio 2.

This collaboration between these 2 multi talented musicians has resulted in this memorable and touching composition, and to contrast that, the B side ´Numero Seenko´ is a club friendly, hard hitting funk tinged number that is totally exclusive to this single!