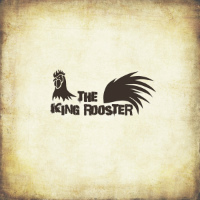 Just in time for Record Store Day, London-based raw funk outfit The King Rooster follow last year’s low-key cassette-only EP, Charisma Cafe, and a string of much higher profile 45s by scratching up a full-length LP of lowdown and dirty funk grooves – the self-titled The King Rooster. And said business is heavyweight in multiple senses of the word. There’s the funk of course; there’s the fact that the album is fourteen cuts deep (eight previously unreleased) and there’s the fact that it’s out on 180 gram vinyl too. Man, that is heavy.

But let’s consider the funk, after all – that is what the monkey does. Much is uptempo jam business of the sort once most capably provided by the likes of Big Daddy Moochin’ – though there’s also something of early Cookin On 3 Burners about proceedings too – not least of reasons for which is the fact that KR’s output is rich in Hammond organ. There are two vocal numbers – the hectic Florelie Escano-featuring Ain’t Got Time For That which was the flip to Gator Jerky (which also appears) on a previous 45 and the even more brisk Do What You Like featuring Coko Buttafli. The LP also features both cuts off the most recent 45 – Back Chattin’ and the even better Fat Chance – a Hammond funk burner with a gnarly drum break and one of the LP highlights. Also of note are Money Walk, on which things get a bit psych with the arrival of a Moog, the chugging Off The Hook featuring scorching Hammond chords and chanking guitar and the laidback Keepin’ Clean which, ironically, is super stanky. Though you won’t find any complaints about that around these parts.
(Out now on Dinked 45)