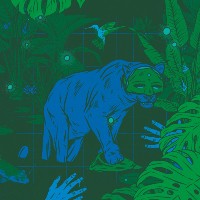 If you like your psych-funk heavy and have been paying attention over the last decade and more, you’ll have clocked Swiss outfit Kind & Kinky Zoo who’ve been maintaining a tight line in monster grooves with added flute fireworks. As far as releases used to go, they once were pretty much knights of the occasional table but of late, it seems, the monkey’s not the only one who has been paying attention. And so it is that the band’s output has not just increased but become increasingly regular to the point that here is a Swamp, a second long player in just four years (which by past standards is really going some for them!) and being released on Stateside label, Funk Night Records, no less.

Swamp follows 2017’s Released! which, in these not-quite post-pandemic times, seems an aeon away so it wouldn’t be entirely unexpected to hear developments in the band’s sound. And so it proves to be, for the new album is more somewhat more varied in tone, has more vocal tracks (three to its predecessor’s one), and is arguably somewhat heavier. The first half of opener Genki Dane provides a relatively relaxed entry to the album’s sound with what appears to be a summery but introspective slice of library music-inspired material while the track’s second half ups the fuzz guitar quotient and hints at a coming storm. Which is precisely what you get on next cut, on the uptempo bassy rumble of Soif, Chameau, Pinot, a former single and one of the LP highlights with muted fuzz underpinning a haunting organ groove and grandstanding flute. B.U. is the first vocal cut and features the distinctive voice of Blurum13 on the mic over a doom-laden groove, followed by the evocative and haunting Pamukkale and then second vocal track Hot Love on which soul veteran Rickey Calloway delivers the lyrics over bleak funk-rock embers. The second half (on vinyl, anyway) of the album begins with the fastest cut, Poulpe Fiction – a blistering flute-led stomp, again permeated by that fuzzy guitar which is followed by what is probably the slowest cut, the spaced-out True Trout which you can imagine equally soundtracking a 60s spaghetti western, giallo or sci-fi flick. The final vocal number has rapped Spanish vocals from La Nefera and Marguax Malya on the, by turns, subdued and ferocious Hasta Cuando which leaves a concluding trio of another former single, Sakura Chan, all positive 60s West Coast psychedelic vibes, the sinuous Rien A Dire and one last blast of fuzz-rock guitar on the early Deep Purple-meets-Jethro Tull-as-orchestrated by Alessandro Alessandroni affair that is bonus cut Seabass.  As with any Kind & Kinky Zoo release, Swamp is a trip.
(Out 4 March on Funk Night Records)