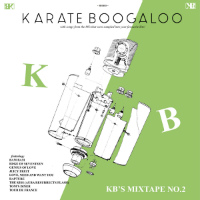 Monkeyboxing is a sucker for funky martial arts references so Karate Boogaloo were always onto a winner when they submitted their KBs Mixtape No.2, the sequel to last year’s …No. 1. This second ‘mixtape’ continues KB’s work of re-interpreting, “songs from the 80s that were sampled into your favourite hits,” (hip-hop hits, that is!) through the prism of the classic library music sound of KPM and De Wolfe. And of course, since the band are effectively the rhythm section of fellow Hope Street Recordings outfit, The Cactus Channel, they are more than up to the task, recording and mixing on tape with no plugins and no edits and releasing exclusively in mono.

For this offering, the band submit a nine-track set that kicks off with the woozy ambience of their take on Blondie’s Rapture followed by a version of one of the most recognisable Jamaican riddims – Sister Nancy’s Bam Bam – that they make sound like a lo-fi instro from Money Mark or Tommy Guerrero circa 1997. Also present is M’Tume’s Juicy Fruit as sampled by Biggie – though those clean 80s lines are now all raw and fuzzy round the edges. Then there’s the revelation that is the band’s cover of Stevie Nicks’ Edge Of Seventeen transforming the 80s big-hair/ soft-rock anthem into a minimal slab of very funky psychedelia. It’s a trick so good they also apply it to Suzanne Vega’s Tom’s Diner and apply the psych at least to Kraftwerk’s Genius Of Love – even if the latter is a more layered affair. Of the remaining three tracks, Patti Labelle’s slowie Love Need And Want You is still a slowie but swaps vocals for lashings of organic funkiness, Tom Tom Club’s electro-funky Genius Of Love becomes a lo-fi ‘crime funk’ soundtrack a la Calibro 35 and Queen’s Aura Resurrects Flash closes proceedings as they began in a dreamily ambient manner. The crowning praise for such an LP of course (as with similar projects from other acts such as El Michels Affair) is that as you listen to these re-interpretations of things that were sampled – you can’t help thinking, ‘Hey these would be perfect to – er – loop some sections from to make beats for rappers.”
(Out now on Hope Street Recordings)

Posted on 5th November 2019 no comments