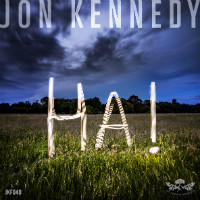 Veteran downtempo beatmaker, Jon Kennedy, finally returns this week with his long-teased new album HA! – his seventh full-length affair in a music career which effectively began with the new millenium when he was discovered by Mr Scruff. Curiously, this was around the time that the 90s trip-hop/ downtempo bubble began to burst and we entered what the Guardian was pleased to term a ‘post-trip-hop world.’ Not that such trivialities seem to have bothered or indeed held our man back since he’s moved unhindered from strength to strength in the intervening years entirely unfettered in terms of generic constraints. And yet in many ways HA! finds big Jon return to the sound with which he first made his name. So how did he do? Is it time for a blow-by-blow breakdown? Of course it is!

2. TWILIGHT
…and isn’t this soporific number perfect for it. James Lavelle was all over shit like this in 1995. Where is he now eh? Eh?

3. BATS IN THE BELFRY
…this one’s all about the pulsing synth bass. Clear evidence, were it needed that Kennedy’s belfry is entirely bat-free.

5. BURN ME
…as in with the heat of cross-generic pollination with drum n bass getting a look in, inna T Power vs MK Ultra stylee…

6. IRON LUNG
Laboured beats, distortion, the very musical incarnation of being on a polio respirator. They’ll probably call this ‘glitch-breaks’ or something in 2017…

8. SLAVE TO THE TV
A stoner-friendly exhortation to do something other than watch fucking Love Island. Oh the irony.

9. MORE THINGS CHANGE (feat. Deirdre Gaddis)
And with some breakbeat crunch, glitchy crackle and a distant trumpet, Mr Kennedy reincarnates those Massive Attack/ Shara Nelson collabs that kicked things off way back when…

10. BEHOLD THE RUBY
…for this is a trip-hop meets ‘Madchester’ gem.

11. MODUS OPERANDI
The glitch influence once more and things get reggae-fied too.

13. SHINE ON
…you, crazy Kennedy. Marry a lazily rolling drum break to folksy acoustic guitars and lie on your back dissolving clouds.

14. THE RUNNER
The stoner more like. Some crackly ambient talking and wafty chords in the background yeah? Bubble, inhale, hold. Exhale. Maybe bring in the drums about a third of the way in? Bubble, inhale. Hold. Exhale. Keep that going for six minutes? Perfect!

15. HA! (feat. Adjua)
The opener now with added neo-soul female vox courtesy of Adjua. You weren’t expecting that were you? Ha! Or rather, HA!

COMMENTS: You’d have thought the fecund breasts of 90s trip-hop would be a well-leathery set of old dugs by now though all the evidence here is to the contrary as Kennedy delivers a set that conjures the spirit of the genre’s earliest classics while acknowledging developments in downtempo over the last two decades. HA! might well cause the Guardian to have a re-think about use of the term ‘post-trip-hop.’.

BEST TRACKS:
HA! Twilight, Bats In The Belfry, Any Road Up, Heaven, Shine On
(Out now on Jon Kennedy Federation)

Posted on 22nd September 2017 no comments