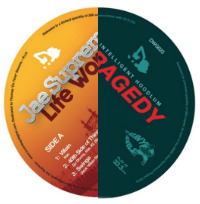 Not one but two almighty golden era drops here courtesy of the tireless Diggers With Gratitude crew and celebrating the work of a legendary Queensbridge producer and a legendary Queensbridge emcee. The first drop Life Work provides a selection of six heavyweight cuts from producer Jae Supreme featuring the likes of Nas, CNN amd Cormega on the mic of which surely the heaviest is funky Nas vehicle Villain which turns on Nasir Jones’ rhymes, a fat bass line and neck snap drums not that it needs anything else. The second release showcases rapper Tragedy a.k.a Tragedy Khadafi and features no fewer than six previously unavailable vocal cuts that were originally submitted for the Black Rage LP in 1991 but were shelved when the original project transmuted into 1993’s Saga Of A Hoodlum. Expect something every bit as furious as PE/ KRS-One and NWA at their most furious – sample lyric, “Because I’m a rebel to America and the red white and blue/ Fuck the po-lice and the president too.”
(Pre-order now on wax from Fresh Pressings)

Posted on 10th November 2015 no comments