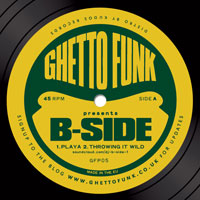 The latest in the Ghetto Funk label’s ‘Artist Series’ and this time it’s the turn of B-Side who’s new EP should ensure his going down in history as a terror since the ghetto funk era. Where his All The Girls EP earlier this year carried a fairly conventional payload, this has atomic capabilities – as dancefloors will find out after the minute-or-so-long build ups of both tracks on the A side. Kiwi MC Kyla jumps in over a fat bit of synth and wobble on Throwing It Wild but Playa trumps even that, appropriating samples from Scarface and an appearance from the man who seems to be this month’s dead rapper go-to for an acapella. Biggie. A word which coincidentally also describes this track. Over on the flip, B-side brings the process of remixing Jungle Brothers Jungle Brother (begun by Aphrodite and others in the nineties) bang up to date with a ghetto funk reversion and rounds it all off by giving Dr Dre a junglising. B-Side then – all party no bullshit.
(Out 3 October 2011 on Ghetto Funk)

(PRESS RELEASE)
The latest EP from Ghetto Funk brings rising star B-Side to take up the challenge for the next in their Artist Series. After massive releases from Featurecast & Stickybuds, B Side comes with 4 tracks guaranteed to get you on you feet and the dancefloor rocking.

His first offering for Ghetto Funk is “Playa” combining samples from the classic Scar Face with a bass line that will leave you shaking in ya shelltoes. Next up “Throwing It Wild” featuring supreme vocals from New Zealand’s MC Kyla and a sneaky sample from a certain “Fat Boy”. On the flip “Two Blue” a funky mid tempo banger of Junglistic Brotherly proportions. Last but not least “G Thing” the end of night floor filler to destroy the floor.