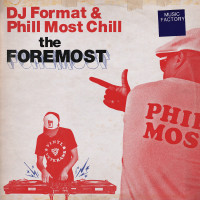 1. THE FEELING:
It doesn’t matter who’s on beats, if Phill Most Chill’s on the mic there’d better be something over 120 bpm or he’s not Phill Most Chill. Like this. Nailing those b-boy colours to the mast from the off…

2. DIGGIN FOR A LIVIN
Hello – we’ve slowed down to 97 bpm. Suspect Phill wasn’t wearing the trousers when decisions were made about this beat. Samples an obscure soul rocker from 60s soul-poppers 5th Dimension along with a bit of Gang Starr while PMC rhymes about the back-breaking search for obscure vinyl in dusty crates. Hasn’t he heard of Discogs or John Manship? The ultimate crate-diggers anthem and an LP standout. Straight dope.

3. GET BUSY MUSIC
…would undoubtedly be swift and Phill delivers two plus minutes of speedy brag-rap (because he’s, “more like a scion of the highest icons”) before Format insists on a 30 second lounge outro by way of contrast.

4. BEVERLEY
…seems to have made quite an impression on Phill. He reminisces at length about her over funky-horns-led breakbeats on another LP standout.

5. ANGRY BIRDS
“Angry birds! What y’all mad about? I might have to air you out.” Yes, please! Preferably over a snarling, squalling psych rock beat that the Chemical Brothers wish they’d done. Another highlight.

7. TRIPLE THREAT MC’S
It’s the posse cut! And a very funky one at that as Phill is joined by Emskee and Oxygen. To say they don’t make them like this anymore would belie the fact that here this is…

8. THE FOREMOST
It’s the title track! “It’s Format y’all, and Phill Most y’all/ You know we do it with a brag and boast y’all”. Not to mention some dirty guitar stabs and garage rock fuzz from 2:38.

9. TAKE A STAND
Racing to the end now and we’re back to fast raps but this time with conscious ire as Phill observes “Black President so I guess I’m supposed to be/ cool with the fact that there ain’t a good school/ in my neighbourhood for kids the same colour as me”.

10. THE SHAPE OF THINGS TO COME
…blows past all previous fast raps like they’re standing still and Phill tosses out bars like “I keep a mic in my clutches/ My rhyme double dutches/ In comparison yours is on crutches.” Just in case you forgot who was boss.

COMMENTS: Surely it was only a matter of time before these two were brought together through a shared love of rare vinyl and hip-hop music – as Phill points out on Diggin’ For A Livin – “it’s not a hobby it’s a job”. Funk, soul and psych-rock samples, b-boy breaks, and everything from lyrics of love to lyrics of fury. Out on wax too – which as Phill also points out on Diggin For A Livin is always a ,”sound investment.” A bit like this.