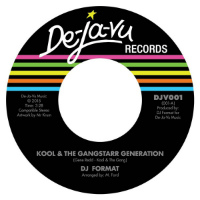 In between dropping quality hip-hop hook-ups with underground emcees of lyrical integrity and note, DJ Format occasionally likes to knock together funky instrumentals and off-the-chain sample-splicing one-offs – like when he remixed Mr Jason’s 26 emcee posse cut Mr Jason’s Got A Posse (on which the first letter of each emcee name corresponded to a different letter of the alphabet) with a beat where the first letter of the source track corresponded to a different letter of the alphabet. On Kool & The Gangstarr Generation though, he manages to surpass himself with a funky instrumental that is also an off-the-chain sample-splicing one-off weaving together multiple Kool & The Gang samples with samples of hip-hop cuts that sampled Kool & The Gang over the Gang’s Chocolate Buttermilk drum break. The clever bastard. Then just in case you can’t get enough of that funky stuff there’s b-boy burner Kool Is Back on the flip.
(Out 26 October on De Ja Vu Records)

Posted on 24th September 2015 no comments