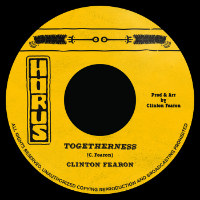 Oh man, this is the perfect antidote to the day I’ve just had. The fourth release from Horus Records is a repress of a rare early reggae cut Togetherness by The Gladiators’ singer and bassist – Clinton Fearon. Stripped back but soulful, the lilting Togetherness was cut in Lee Scratch Perry’s Black Ark studio back in 1974. Less a record than a wax incarnation of the very concept of serenity, you’ll feel like you’re floating in nirvana being fanned by naked angels just listening to it. And it’s backed with an even mellower non-vocal dub – also out on digital for Serato commandos.
(Out now on Horus Records)