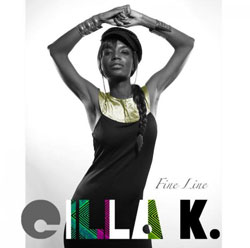 Two things struck me when this was dropped into my inbox. One was that Cilla Black is now no longer (thankfully) the only singing ‘Cilla.’ Secondly, it’s been ages since I heard any decent RnB – after all there was a time only a few years back when RnB (both good and bad) was as common as lazy euro-trance-inflected electro crap is now. That was until the advent of euro-trance-inflected electro crap of course. Happily Cilla K is here with some decent beats and production from N.E.R.D’s Junius Bervine that recall early Kelis/ Lauryn Hill and a voice somewhere between Erykah and that bird from Morcheeba. Plus she’s very easy on the eye. And she’s very polite. Y’know – I’m thinking you should probably check the album – I’d recommend Drive You Home (Remix), Evil Child, Demain and Easy To Love – get your ears round it HERE – more details below…
(N.B. Attention promotion companies – this post should not be regarded as an open invitation to spam my inbox with half-assed Mary J Bilge (misspelling deliberate) imitations. The monkey remains, as always, all about the funky bumpin’ beats. Cilla K is dope. Word.)
(PRESS RELEASE) Cilla K., the French West Indian vocalist and beat maker is releasing her first album ‘Fine Line.’ The album reflects the diversity of musical elements imported from her multicultural background combined with her passion for classic , crafted melodies and lyrics. “At the beginning, I felt like this album had to be done a long time ago but I kept growing and I always felt like I should incorporate new qualities I had gained with time. Truth is, the timing couldn’t be better because it is finally so representative of who I really am”. The artist is on a mission to bring something intriguing to the table, with a concoction of indie and alternative beats, subtle jazz hints, hip hop and soul music sonorities. On the verge of finishing her history studies at Sarah Lawrence College, Cilla K. had randomly ran into David Pattillo, a New York music producer as she was on her way to a casting call. “Modeling was great at the time for paying the bills ” she gladly admits “but I always felt like I should be on the creative side, you know? a photographer, or a designer maybe..because art had always been part of my personality, I always felt like I was more of a creator than a creation”. From their very first collaboration,with the release of the song Lost in you posted on their website, Cilla K. and her producer had managed to attract the attention of several established artists of the industry. “In a couple of weeks, Mr.Khalyil from The Bush Babees was working with us. We also had Danny P. who was working with Joss Stone at the time, write Black and White with us, and the reactions were overwhelming”. The arrival of Junius Bervine in the team, (former COMMON’s musical director, who had worked with D’Angelo,Floetry, Lauryn Hill,Vivian Green and now part of the N.E.R.D team) would prove to be crucial. “He is incredible, he has so much creative energy in him,it’s ridiculous”. Cilla’s dreamy vocals mixed with Junius’ edgy beats has lead some fans to describe this new team as “a cool and different bunch”. “Back in Guadeloupe my family didn’t look very surprised by the interest, but everybody was very supportive, my mother said she prayed for me and was happy I had found balance and happiness in a new home not very far from home. I guess that’s the beauty of New York, no matter where you’re from, you always feel you’re home.”
Cilla K – Fine Line – Tracklist
1. We Are One – Intro
2. Fine Line
3. Connected
4. Drive You Home (Remix)
5. Black And White
6. Lost In You
7. Hallucination
8. Evil Child
9. Demain
10. Child Of The Universe
11. Drive You Home
12. Future
13. Rise On Me – Interlude
14. Nomad
15. Easy To Love
(Out now)