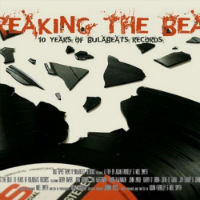 If you’ve been a label for ten years, why not commemorate the event by putting out a documentary short and getting it picked as part of the official selection for numerous film festivals including the Dublin International Short Film And Music Festival, the Chicago Irish Film Festival and the Ozark Shorts Festival? Why not indeed? And that’s precisely what Bulabeats Records (which is to say Johnnypluse – the human dynamo behind Bulabeats) has done – in conjunction with Bad Apple Films.

That’ll be twenty minutes then, to fill all the gaps in your understanding of the label’s development from an excuse for JP to put out debut LP Funky 5 Years Ago a decade ago (cruelly ignored by the entire global music press except for ten out of ten in a European dance music mag) to today’s varied roster of talent, the explosive arrival of stadium-rockers-without-the-rock-or-the-stadium live project Johnnypluse & The Stormtroopers Of Love and widespread crowd and media acclaim. Find out why JP no longer prefixes his name with ‘DJ’! Discover the the ‘pluse’ part is actually pronounced ‘ploosh’ anyway! Gawk at the size of Hephph’s beard! And – not least of the marvels contained hereon – ponder the whys and wherefores of Dublin-based Dirty Dubster Jay Sharp’s suspiciously authentic antipodean accent. All that and closing cameo from DJ Moneyshot. What more could you want? Well – how about the Breaking The Beat Mixtape capably put together by DJ Flux? Check it below video and Juno player.

Posted on 21st December 2016 no comments