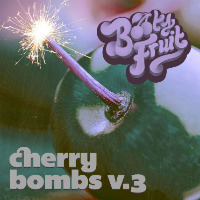 It’s been a while since we had any hip-hop/ reggae Cherry Bombs but fear not for the (cherry) bomb bay of Booty Fruit command’s Vol. 3 will shortly be opening right above you. Nynfus Corp are on a grimy dub tip for example and the ever trusty DJ Maars is back (man) to apply to his beat an emcee who’s not a wack man but someone who eats rappers like he’s Pacman. That’ll be Das EFX then. Brownie points to Maars for finding a old school ‘pella that is underused these days. Underuse isn’t, however, an allegation you can level at Dizzlematic‘s application of The Fugees and Cypress Hill’s Boom Biddy Bye Bye which has been previously rinsed hard by Dedy Dread for one though his stoned latin reggae twist here shows it’s a vocal that hasn’t shot all its shots. The same goes for Hiphoppapotamus‘s use of the JBs’ Jungle Brother opener which turns out, far from being stale, to be an ingredient of the standout track here – aided and abetted by the massive straight skankin party beat.
(Out 26 June on Booty Fruit)