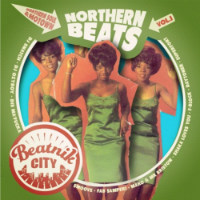 Forget mods vs. rockers. If diehard northern soulies get wind of how fast and loose the very concepts of Motown and northern soul have been played with for Beatnik City’s latest booty-breaks outing, it’ll be bowling bags at dawn, Bruce Lee kicks and ninja-style clouds of talc thrown in the eyes. Just as well those involved are all on their game for Northern Beats Vol. 1 then. Smoove ensures that men in ankle length-flares and dodgy string vests will have nowhere to run with a b-boy take on Martha & The Vandellas for example – a route also followed by DJ Ozyboy & Dis Ma’Fucker who get breaks-funky with Motown white boys Rare Earth. Mako & Mr Bristow pump up the drummage on an ancient Olympics number (“that’s got a wiggle on it!” as one Craig Charles recently commented) and this is a stylistic route also taken by DJ Snatch with Marlena Shaw’s Wade in The Water and Daytoner‘s Stevie Stomp which does what it says on the tin. There’s also a brace of soul-n-b cuts from the mighty Fab Samperi and F-Block while Superfort gets all ghetto northern soul and Shaka Loves You get crazy in stomp with a Chi-Lites 70s funk bump. It’s quite the best collection of purist-baiting breaks ever put together – if only at least one of these tracks were out on vinyl. Er – actually one will be. Happy days!
(Out 5 February on Beatnik City)

Posted on 4th February 2016 no comments