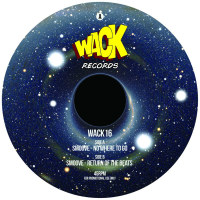 If only at least one of the booty soul breaks cuts off Beatnik City’s epic Northern Breaks Vol. 1 could appear on vinyl sighed the monkey previously about said EP. Yeah – like that’s going to happen – Beatnik City are thus far digi-only. If only one of the dj/ producers involved had their own party breaks label and were all set up to do vinyl. Enter Wack Records (prop. one S. Moove) and Wack 16 – featuring a Vandellas-on-steroids A-side Nowhere To Go (prod. one Smoove). Could things get any better? How about bringing ’88 back with Return Of The Beats – a re-make/ sequel thingy to Mantronix’s classic King of The Beats on the flip. The only bad news is that you’ll have to wait until the end of the month.
(Out 26th February on Wack Records)

Posted on 4th February 2016 no comments