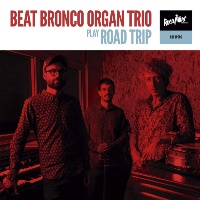 Champing at the bit with lockdown? Can’t leave the house unless it’s essential? Why not let Madrid’s Beat Bronco Organ Trio take you on a musical Road Trip instead – for such is the name of their recently released debut album. Not that these three are strangers to the world of funk and soul – having racked up experience playing with bands The Sweet Vandals, Speak Low and Mighty Vamp in their time. Road Trip itself provides ten tracks of Hammond funk with a total playing time of nearly forty minutes which means for any road trip worth the name, you’re going to have to play it a few times back to back – although you won’t mind doing that since the band worship at the twin altars of Jimmy Smith and Jimmy McGriff and judging by the sound of things, they are the most capable of supplicants.

Hard Play forms the opener and chugs along with a super heavy horn section before the pace picks up for the band’s former single Hey Hey – a cover of Dave Bartholomew’s proto-funk R&B cut featuring a scorching vocal turn from Alberto Palacios Anaut – the only singing on this otherwise entirely instrumental set. The squelchy funk of the appropriately-named Squirtly follows next with the first of two flute-loopy turns from Chip Wickham who also appears on the heavy psych-funk of Electro Pi. This latter goes from lone rhythm guitar and the occasional echoey drum fill to bouncing organ groove eventually topped with squalling guitar and provides something of the contrast to the jazz-bluesy, Moogy thrills available on the title track which follows it. Crispy Time sticks with the jazz-blues but in a more stop-starty fashion while earlier in the set Eternal Question explores yet another jazzy avenue with a bit of fusion. The balance of cuts is made up by the lead tracks on two former singles – Easy Baby which builds from initially quietly smouldering soul jazz to a soaring crescendo nearly four and a half minutes later and the breakneck wah-wah and Hammond-led funk of Beat Bronco.  Road Trip then –  one you’ll definitely want to take, whether in a car or just at home.
(Out 28 March on Rocafort Records)