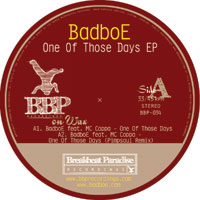 Not one to rest on his laurels while habitual crony Prosper is off doing the big beat/ nufunk thing, original nufunker Badboe only decides he’s going to share a massive skankin hip-hop banger with us all in the shape of One Of Those Days – the lead single of his forthcoming second album. Cheers guv – don’t mind if I do. On toasting duties and completely on point is MC Coppa a man I last caught ripping things to shreds on Basement Freaks’ remix of Quasamodo’s Bollywood Man and here he is again shouting out to all his ‘rudeboys dem.’ By way of a garnish and just because he can, our man BB also lobs in a sample of Johnny Nash’s reggae version of Sam Cook’s Cupid which pretty much functions as the icing on the cake. Pimpsoul gives it the wobbly ghetto funk once over, and then Badboe’s back with a solid funky breaks effort that makes heavy use of Ripple’s funk classic I Don’t Know What It Is But It Sure Is Funky. Finally (and apparently for jollies) he turns this over to Bryx who transforms it into a migraine-inducing breaks monster – presumably because it was one of those days. Press guff below vid below player…
(Out now on BBP Recordings)

(PRESS RELEASE)
BBP Recordings is very proud to welcome back a true legend in the evergrowing Nu-Funk scene – BadboE is ready to drop the first single from his long anticipated second album. He has teamed up with 2 heavyweighters of bassdriven Ghetto Funk Pimpsoul from the UK and Bryx, who are killing dancefloors in Canada at the moment. UK-based MC Coppa is delivering the vocal contribution to the reggae dub grooves on the A-side title track One of Those Days.

After the success of the first BadboE album Break The Funk from 2009 and remix album Break The Funk Remixed from 2010, he’s kept himself busy remixing and releasing tracks on labels like Bombstrikes (UK), Baffin Beat Brigade (USA), Manmade (Germany), Bogie Boutique (UK) and many others.

The always spot-on pumpin’ beats and crafty sample chop-ups has earned BadboE a lot of respect in the funky breaks scene, and with this EP he is ready to take it a step further with the radio friendly One Of Those Days and the bangin’ b-boy funk jam Make It Happened on the flip-side. The club mixes are handmade by two of the best bass producers in the Ghetto Funk scene, Pimpsoul who has released some
very successful EPs on Bombstrikes and Canada’s very own Bryx who making crowd’s shiver across Canada and on this year’s Shambhala Festival.