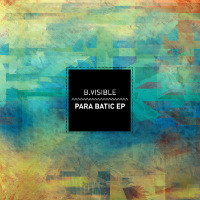 Austrian dj/ producer B.Visible returns with his new five track Para Batic EP and if you know the Viennese villain’s previous work, you’ll know his genre of choice is glitch-hop. In fact, less a genre really, than the breakbeat equivalent of Norman Collier’s faulty microphone act. And he’s rather good at it. Indeed, he’s responsible for my favourite ever glitch-hop track – Sun No Shine which opened Scour Records‘ mighty Scoured Cream Vol. 1. This time around he’s gone for mellower soundscapes and kicks off with an apology. Not his own, of course, but a very sincere sounding Japanese lady on the synth-laden Very Sorry. And it’s synths that define the EP, though our man keeps it decidedly soulful and upbeat. Or at least as far as you can while working in the stop-starty nature of glitch music – as closer Ahhh Crackle displays to maximum effect.
(Out now)