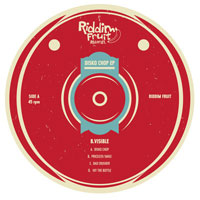 The Riddim Fruit label deliver something a little different from their usual fare here in the shape of Austrian B Visible who ensures he’ll make an appearance on musical radars with his new journey into sound, Disko Chops. When I say ‘journey into sound’ however, I’m not referring to some Coldcut-style sampledelic trip along the audio highway so much as a well-organised four-track get together from a few neighbours on Instrumental Breaks Avenue – to wit, hip-hop, glitch-hop and Disco – with P-Funk dropping in occasionally throughout the event. Belle of the ball is track two, Priceless Smile which flirts around all digital-soul like but is obviously going to be copping off behind the breaks marquee with the bass-y squelches of Bad Crusher. Meanwhile the title track hooks up with the appropriately named Hit The Bottle and both of them stomp around looking to take out their frustration out on the first laboured metaphor they come across.
(Out now 4 September on Riddim Fruit)

Posted on 3rd September 2012 no comments