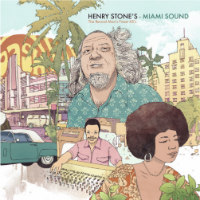 In the space of a year, the Athens Of The North funk, soul and disco re-issue label has so convincingly established itself as a rare groove purveyor of note with a string of super dope (not to mention super rare) 45 re-issues as to join the monkey’s regular ones-to-watch list along with MB favourites Tramp and long-standing re-issue heroes Soul Jazz. Now, the label drops this tribute to legendary TK Records owner Henry Stone – the man behind 100 record labels and 100 million worldwide record sales, who was also instrumental in signing James Brown to King and recording Please, Please, Please no less. But while Stone fostered the early careers of Betty Wright and KC & The Sunshine Band no less but he was also there in the background for a host of others.

Henry Stone’s Miami Sound – The Record Man’s Finest 45s gathers together 20 cuts taking in funk, soul and disco and focuses on Stone’s less high-profile (though no less soulful) signings. Some of the names will be familiar – Robert Moore and Funky Nassau (whose Bahama Soul Stew has also seen the light of day on Tramp) and Raphael Munnings who many will know in his day job as lead singer of Beginning Of The End – famous for their track Funky Nassau (not to be confused with the band of the same name) and some less so. The LP covers all stripes of funk and soul from the raw grit of Lynn Williams’ It Takes Two and Willie Johnson’s Lay It On Me, to Formula 1’s disco funk Walking With My Eyes Closed and T-Connection’s four-to-the-floor Do What You Wanna Do passing through the blaxploitation funk of stuff like Jimmy Bo Horne’s Hey There Jim on the way. Did I mention that it also features Brand New’s ‘holy grail’ cut Thousand Years? Well worth your green. So much so in fact that the monkey felt it might be worth a few words with the man behind Athens Of The North himself. That’ll be Euan Fryer – here’s what he had to say to his ‘funky five’ questions:

1. You’ve released some fantastic cuts in the last year and the monkey is eternally grateful (as no doubt are many others) but what convinced you to set up a vinyl re-press label in 2015 and how sustainable do you see it as being in the future?
I have been working with Jazzman Records for over ten years, running many parts of the record business as well as being a collector and DJ. I was just ready to go out on my own and do it my way. I saw a gap in the market for a high quality modern soul, disco etc. label based on records I had been playing for the last 15 years. The market is strong. Many ‘Serato’ kids are now dipping their feet into vinyl, labels such as; Numero, Jazzman, Now-Again, Ubiquity, Eglo, Sofrito, BBE, Traveller, Daptone, Timmion and Cherries are all putting out strong, quality stuff. I’m seeing a fantastic, younger new rare-groove scene based on musical merit. The rise in sales in this area seems to be driven by DJs like Theo Parrish, Floating Points, Four Tet, Alexander Nut etc., and is leading to a far more creative DJ sound. People are getting back out there on the edge, genre hopping and changing tempos. This is where DJs should be; taking risks. This new rare groove aesthetic is great. I have always played across the board and let the quality be the common factor. It’s not just about how well you can blend two house records. It’s about how you get from that Brazilian record to that house record and everything in-between. Kids can’t afford to pay $2000 for one 45, and frankly it’s grotesque to spend that money on something to DJ with. I still buy rare records, but I don’t judge others on the fact they can’t afford or don’t want to buy them – that’s over. Not only that, but most of my reissues sound better than the O.G. I go out and licence the music right and then do everything in my power to make the pressings as good as they can be. It’s attention to detail that makes everything move forward.

2. What kind of problems are involved in licensing previously released funk/ soul records? What has been the biggest headache?
Trust is a major issue with older artists who have had a rough time in the industry. It’s a business and many were exploited. They are right to be wary of strange calls from the UK. So, I spend hours on research; email, phone, send examples of my work, and if I have to – and can afford it – I’ll go see them. It’s hard work, but as with everything in life there are no shortcuts; get up, do the work and get results. Good relationships are a huge part of it and I have guys in the States who help me. I’m forever grateful to them all – you know who you are.

3. Do you have any interesting stories about things you’ve re-released or have you made any interesting discoveries?
One time in NY I went to a flat – without giving anyone the address – to meet a producer. I did not think anything of it, but on arrival shit just felt weird. Duvets over the window and porn and weird music and sex ephemera all over the place. I was told to sit in a specific seat near the bed. Out of my left eye I could see this sock on the bed that looked like it had something heavy in the bottom of it. I thought, “that’s it, I’m either getting raped or killed”, downer. Turns out he was just a photographer and was very cool, so I left intact with records and a licence. But that taught me never to go to strange houses alone.

4. The monkey was a big fan of the Raphael Munnings release – Opportunity Knockin’ cut was superb and you’ve also re-released the monkey’s favourite ever funky soul cut – Sandy Gaye’s Watch The Dog – what have been your favourite releases and what drops are you looking forward to?
Weldon Irvine I Love You is a real favourite, it’s up there with What’s Going On. To be honest, I love it all. That’s what drives me. I’m trying to find the records I love every day; not the ones that land in my lap, or are easy. It’s that love, drive and passion for the music that artists can feel from me. That’s what makes it happen. Most of the time… I’m looking forward to doing the Black Fairy reissue, as everyone involved was lovely and has a strong social conscience, and that matters to me. I have also been working on a local Edinburgh post-punk band Boots For Dancing’s unreleased tapes and a Peel Session for over two years, and I’m really looking forward to bringing that out as it’s something different and very special. I think John Peel said they were one of the two bands that had ever made him dance, and now 30 years later we have an LP that should have made them stars – it’s really good.

Players below.
(Out 29 June on Athens Of The North)