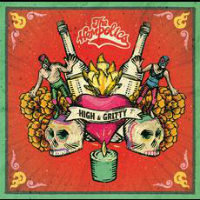 The Hempolics return with a new single showcasing their particular brand of soul and hip-hop infused dub-reggae in the form of High & Gritty. Said song apparently relates the love affair between band leader Grippa and a Mexican senorita and is remixed by no fewer than four bashment bandits – Fleck, Dubmatix, the ever-reliable DJ Maars and the splendidly-named Umberto Echo. Oh and there’s a video. But how to visually represent such goings-on? What about a video set during the decidedly un-Mexican Notting Hill Carnival which is nevertheless a place where you can both get high and probably a bit gritty too given the capital’s questionable record on air pollution. Yep – that should do it.
(Out April on Shark Free Records)