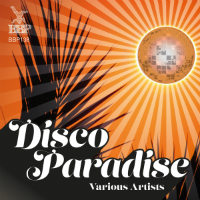 Disco Paradise sees Breakbeat Paradise continuing a series of generically-themed outings that have previously taken in 70s funk and dancehall reggae and which, this time, finds the label turning its breakbeat sights on the glittery world of disco. But where on earth might label boss Badboe find a team morally depraved enough to embrace the nefarious influences of the mirrorball lifestyle replete (as it was) with profligate drug-snorting, rampant promiscuity and the spangliest outfits known to mankind? Enter – with indecent haste – luminaries of the contemporary worlds of both party breaks and nu-disco: Dr Packer, Shaka Loves You, DJ Kid Stretch, Leygo, Charlie Beale, Morlack, Pied Piper, Morongroover & Mr Bristow, Basschimp and Don Dayglow.

The ensuing collection of tracks mainly manages to stay the disco-side of the fence that nu-disco shares with house and there is enough syncopation to keep breakbeat fans happy – indeed, it’s only really Basschimp who fully goes over to the dark side with a pumping take on Herizen Guardiola’s Set Me Free off The Get Down. All in all, it’s a highly consistent drop though, if pressed, one might claim that two tracks stand out in particular – Leygo’s bass-funky Get Up and the latin-piano ‘n scratches-tweaked minimalism of Morongroover & Mr Bristow’s Jump To It.
(Out 26 May (Juno exclusive)/ 2 June (globally) on Breakbeat Paradise Recordings)