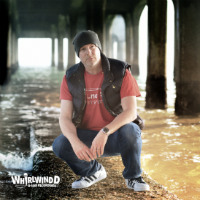 Here’s another hip-hop 7″ for the b-boys in the form of Whirlwind D’s cautionary tale Doin’ It, over an epic beat from Djar One with cuts by Specifik. A cautionary tale? Yes – and one about addiction. To hip-hop. “I might be old but it doesn’t really matter/ The beat gets fatter my knees are being battered.” Jesus D! Were you never warned what hip-hop could do to a man? What? That’s not even the worst of it? “Hairs out my nose, and my hearing’s all shattered/ Six pack’s gone; complexion’s all tattered.” Christ on a bike! Where were the public health warnings? This is a colossal oversight on someone’s part – is there no silver lining? “But the funk’s still fresh and you have to admit/ Specifik, Djar One and D, we’re still doing it.” Hmm – well – the funk certainly is fresh – pharmaceutical companies will be after Djar One for that beat and there’s no denying that these three are very much still ‘doing it.’
(Out now on B-Line Recordings)