VARIOUS: Down In The Valley (Perfect Toy Records) 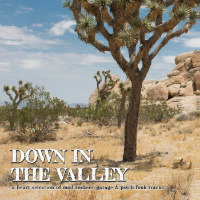 Perfect Toy have been digging the crates again and this time knocked out Down In The Valley which comes in two vinyl volumes or one combined cd. They should probably get someone they know well to sort out the sales notes for that. Oh – hang on – whatdyaknow: ‘“A heavy selection of mod-rockers, garage and psych-funk tracks,” runs the sub-title of new compilation series, Down In The Valley from Perfect Toy, encapsulating in a nutshell the multifarious pleasures on offer.

And what better way to open such a set than with Van Broussard’s banging titty-shaker Mojo? This is followed by The Little Bits’ screaming garage-soul cut Girl Give Me Love (recorded when the band members were all between nine and twelve years old!) and Frozen Sun’s Jamm Pt.1 – a monster psych-soul number secretly laid down in the lobby of radio station KTKT (in Tucson, AZ) on a Sunday after midnight and about as aptly named as a track can get. Cover song thrills are to be had in the form of Phlegethon’s heavy-psychedelic take on the Clint Ballard-penned classic You’re No Good and The Penny Arcade’s version of Funky Way while yet more garage-soul delights are locked down by offerings from The Chapters, The Looking Glass and The Four. Pump’s previously unreleased Ashtray Candle 6:33 is a slow-grooving psych masterpiece and another previously unreleased cut is Morning Reign’s dance-floor heater Can’t Get Enough Of It. There are also two frantic garage-soul cuts from a pair of super-obscure groups: 1906 & Company and Band of Gold while Rex Garvin & The Mighty Cravers’ titty-shaking instrumental Strange Happenings slows things down to a monster shimmy with retro horror movie vibes. The Animal Show Band’s Tell Daddy provides the male answer to Etta James’ Tell Mama and rocks just as hard as the original while Gino Scorza’s funk-tinged soul heater Little By Little (which he originally privately pressed himself) gets reissued for the first time. Closing the album is a real treasure by Big John K in the shape of his heavyweight slab of soulful blues-funk – Poor Souls.

Once again, Chan the Man – previously the guiding light for Perfect Toy’s Down & Wired series – was the driving force behind this project. It is his incredible knowledge, combined with the network of record collectors, DJs and vinyl nerds that he has established over the past few decades which have made it possible to come up with such a high-octane selection of super-heavy and extremely rare tracks. Accompanied by detailed liner notes and never-before-seen photos of the artists, The Best Of Down In The Valley sets the bar high.’(Stone Monkey/ monkeyboxing.com – March 2018)
(Out now on Perfect Toy Records)