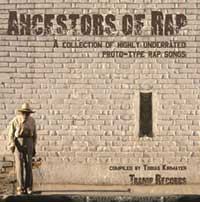 Boom-bap original rap, it came from the funk and that’s a cold, hard fact – and here’s 16 excellent reasons why as Tramp Records’ bossman Tobias Kirmayer finds another excuse to share the findings of his funky beat-mining with the public on Ancestors Of Rap. Not that he needs an excuse of course, the man’s a terminal funk-fiend, but this compilation has an interesting raison d’etre. It is, of course, basic music history knowledge that hip-hop’s foundations have been firmly cemented in funk since the beginning when Kool Herc beatmatched funky breakdowns back-to-back in late 70s Bronx bock parties – so it’s natural to assume that you’ll be getting a collection of funk and soul classics here. And you certainly will. But if you thought you were just getting that, you don’t know Kirmayer and Tramp Records. For a start, if they do one thing, it is to deliver the groove rare (often after carefully negotiating deals with obscure names who only originally dropped wax as private pressing) long after most of what used to be funky rare groove has been repressed, compiled and spun to within an inch of its life. Secondly – and here’s the main conceit – the artists on this collection aren’t just the ‘ancestors of rap’ because they played funk, they’re the ancestors of rap because the lyrics are delivered on the beat – like in hip-hop yo! ‘Prototype’ rap as Kirmayer puts it. And we’re not talking stoned Last Poets/ Gil Scott Heron material either as is clear from the start of a collection which is filled with mainly rare cuts that’ll rock a block party at the drop of a hat.

I say ‘mainly rare’ funk classics since one or two big names make an appearance – Blowfly for example (not to be confused with The Blowflys, who are also on here) and a guy called James Brown with a track called Get On The Good Foot that you may have heard of. Also if we’re being honest, Iris Bell & The Jivettes’ Honky Games also appeared on Tramp’s Movements Vol. 4. Still, I can’t imagine anyone arguing with the inclusion of these three and if you haven’t heard the X-rated Blowfly (a.k.a. Clarence Reid) version of Sesame Street (“A…ass, B…bastard, C…cunt” and so on) or the Jive-ettes kicking the funk on Honky Games you’re in for a treat. There’s everything from the crustiest of old funk (Rufus Beacham’s Do You Have a Good Woman to the pimp-funk of Bobby & Deborreh William’s The Pusher’s Thang and the soul groove of Timmie Rogers’ Snake Hips to the blaxploitation cop show dirt of Round Robin Monopoly’s Little People. My personal favourite though has to be opener Pigmeat Markham’s We Got The Number?. Who got the number? Tramp got the number. More essential dope!
(Out 8 October on Tramp Records)

Posted on 22nd September 2012 no comments