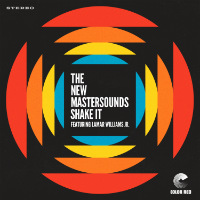 Would you believe it, The New Mastersounds new long player, Shake It, is out already and like the three singles already lifted from it (Let’s Go Back, Kings & Queens and Taking Me Down) it is billed as ‘featuring’ singer Lamar Williams. You’ll be unsurprised to hear that’s because Williams appears on most of the tracks so, obviously, this isn’t the sort of instrumental set punters have traditionally come to expect from the band. Mind you, given that their twenty-year career has now lasted twice as long as the period of music (roughly 1966 – 1976) from which they draw their primary stylistic inspiration, they might be expected to, well, shake it up a bit every now and then. But how has hooking up with Williams (son of Allman Brothers bassist Lamar Williams) worked out for them? Let’s have a gander:

1. SHAKE IT
A suitably lively bit of funky clatter with which to introduce Williams’ honey on toast voice…

2. LET’S GO BACK
…immediately trumped by the LP standout, a fat slice of bluesy swamp funk which flexes like a mean ol’ gator from start to finish – hot damn!

3. LOVE THEY DESERVE
A.k.a. soul-jazz they deserve and a very bluesy slab of it to wit. Let’s out it this way, you need no further convincing of the choice to employ Williams.

4. TAKING ME DOWN
Hello, it’s the New Mulatusounds! Yes, the band head Ethiopia-wards – didn’t see that coming did you? Well, not unless you read the monkey’s coverage of the single back in August.

5. TOO LATE TO WORRY
Blimey – now we’ve gone all neo-soul – guess it’s too late to worry…

6. LAYIN’ LOW
..no need to lie low though, for here’s this LP’s crowd-pleasing New Metersounds bump (as the boys make up for their oversight on Renewable Energy) – an organ-led nugget that nobody does better. Well, apart from the actual Meters of course…

7. LIVE LIFE FREE
…who managed to dodge jazz-funk in the seventies (no mean feat., I
think you’ll agree – there was a shit-load of it about) unlike NMS who go ride cymbal crazy on this.

8. KINGS & QUEENS
Here we go, back on track with the one the single PR billed as ‘Average White Band meets Marvin Gaye.’

10. ON THE UP (S.K.A.)
Ska-jazz is a thing? Ska jazz is an actual thing? I didn’t know that. Did you know that? Williams appears to have hidden himself away for this one for some reason…

11. LOVELY DAZE
…but he’s back again for the seventies soul warmth of the closer and alls well once more.

COMMENTS: As the cover art (not to mention the title) indicates, Shake It yields a positive kaleidoscope of  sounds heading at times into a variety of lesser travelled directions and experimenting with genre and sub-genre fusion.   Arguably the more significant fusion however is that of NMS instrumental talent with Lamar Williams’ vocal presencee – a bonus that will be welcomed by old NMS fans and net them many more and one that the monkey suspects may well not be a one-off.