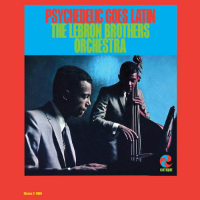 If you were only ever going to get yourself one Latin soul record – it would probably have to be this one – 1967 classic Psychedelic Goes Latin by Puerto Rican outfit The Lebron Brothers Orchestra. The very epitome of the Latin boogaloo melting pot of salsa, mambo, soul and funk, it’s a bare eight tracks deep – every one of which could have been a single and none of which was. Well alright Summertime Blues did eventually get a release as Funky Blues in the early seventies but still – there’s plenty of ‘first time on forty-five’ opportunities here if someone can be bothered to make the effort.

The release notes make a big deal of the reference to psychedelia in the album title, “Producer and Cotique label chief George Goldner recalls ‘All the tricks of way out sounds are put into these numbers. You will hear the weirdest sounds ever cut in Latin dance music. No one has ever dared to produce this sound in Latin Music in the past, but I felt the time had come to do it as all past records had the same sounds.'” Despite this – er – you’ll find plenty of tracks by the likes of Pete Rodriguez, Tito Puente, The Nitty Gritty Sextet, Ray Barretto, Ralph Robles (I could go on) which were all done around the same time with much the same sound. Not that that should in any way make you doubt the dopeness of this record. Opener Summertime Blues is the most most famous cut and the best but Mi Mambo, Mary Mary and My Cool Boogaloo are the best of the already excellent rest.
(Out late Feb./ early March on Get On Down Records – N.B. This album did already get a special US Black Friday Record Store re-release back in November and some copies made it to the UK. The forthcoming re-release is the official UK domestic one)

One Response to THE LEBRON BROTHERS ORCHESTRA: Psychedelic Goes Latin