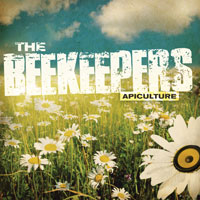 Bristol beat luminaries Boca 45 and Parker a.k.a. The Beekeepers finally make good their promise to deliver a full length album, Apiculture, in the wake of this year’s moody Ascending Change EP and their debut party-banger effort the Bee Funk EP from 2009.

As you might expect Apiculture is packed to the gills with offerings of both kinds i.e. moodiness and party-bangers. The LP totals four vocal tracks and eight instrumentals (two of which were from the last EP) and is unmistakably from ‘Bristol sound: the next generation’ territory – a region currently also being explored by Ewan Hoozami and Unforscene. As Parker and Boca 45 themselves acknowledge, they wear their Massive Attack (et al) ‘Bristol Bass’ influences on their sleeves in their bottom-heavy production aesthetic. However, unlike the old school, large swathes of this LP are uptempo and upbeat and you’re as likely to hear dubstep wobblisms and percussion, funky breakbeats and off-beat ska melodies as you are tramadol-taking breakbeats. The Mystro-featuring Queen Bee sounds like a collision of The Freestylers and The Heavy while To The Roots rocks a ska/ northern soul organ over a minimal dnb speed break. The second Mystro track enters Foreign Beggars territory and of course the cinematic soundscapes and moody female vocals are there in the Hazel Mills and previous Parker collaborator, Sarah Scott. There’s also evidence that these boys might have been listening to infamous mid-nineties big beat compilation Brit-Hop & Amyl House. The 117 bpm Spring Forward is all a bit acid-tinged mid-nineties style big beat (until it goes dubstep) and Opt Chopped Intermission is another instrumental banger with more than a nod to Monkey Mafia’s Blow The Whole Joint Up.

The Beekeepers drop bigness then – for which you should be grateful – just as I am that the accompanying press guff (see below player) is thankfully free of appalling bee-related puns with which its predecessor was stuffed. If Apiculture isn’t in the monkey’s top ten end of year album’s…I’ll be surprised.
(Out 9 May on Jalapeno)

(PRESS RELEASE) Apiculture is the debut album from Bristol production duo The Beekeepers. The Beekeepers consist of Scott “Boca 45” Hendy and DJ Parker. The album is steeped in the musical history of their city but just as importantly pushes the Bristol sound forward by mixing classic and future dub with electronic music and hip hop.

“Coming from Bristol and being DJ’s you can’t help but be influenced by the old guard of The Wild Bunch, Smith and Mighty, Portishead and Massive Attack but we’re also influenced by the energy of Dubstep coming out of our City too. We’re just fusing it all together in a way that makes sense to us.”

As well as his DJ & production work as Boca 45, Scott is the writer producer behind indie band Diego & The Dissidents (recently featured in the Banksy Film “Exit Through the Gift Shop”) as well as being the man behind the mixing desk for Malachai (signed to Domino Records and feted by Zane Lowe as his “hottest record in the world” on his radio show)

Parker completes the core of The Beekeepers. An extremely talented and always in demand DJ who learnt his trade via the battle route – he has been steadily picking up fans since the release of his debut Parker album “To Eternity”.

As The Beekeepers – they have found a common ground in exploring the Bristol sound and have created an album of highs and lows with classic party hip hop like Queen Bee mixed up with downtempo torch songs like So Long. The album is underpinned by a series of epic string laden instrumental tracks on which they worked with talented composer Ben Salisbury. Vocal tracks come from rapper Mystro and Bristol songstresses Sarah Scott & Hazel Mills.