STEPPIN’ TONES: The Feeling Is Mutant 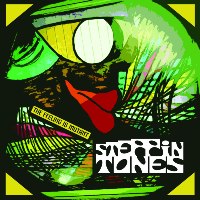 The last, but by no means least, of a flurry of releases (mainly albums – hence the long lead before posting) that arrived on the monkey’s virtual doormat over the seasonal period was Steppin’ Tones’ long player, The Feeling Is Mutant. A man who definitely doesn’t have the profile he should do, Mr Tones is a dope mash-up king and maker of good-time big beat breaks in the old school mould. And if good-time big beat breaks is your bag, you’re in for a treat with this twelve track set that evokes the era of the Heavenly Social, Blowpop and the Big Beat Boutique.

MB regulars may note that a few tracks are familiar. One of these is ST’s fat 2016 banger 70’s Beach Break and another is Wombat Shuffle of similar vintage both of which team chunky funk drum breaks with thunderous bass and sixties vocal and instro samples. Still another is opener Coombe Jingle which fits neatly alongside these with its retro keyboard motif (not to mention commemorating a certain Bristol suburb) along with Mouve Monster (Big Kiss). If you want something that messes around more with FX a la Depth Charge there’s a bit of that too – the distorted echoey synths on the crashing Hen Groove or monstrous You’ve Got What I Like. Then again perhaps you favour Lionrock-ish ragga big beat stylings of Ku Ka Lua Lama or closer Side Winder or even something zanier (but still with a keen ear for a groove) à la Bentley Rhythm Ace for which check out Mexican Herbsman, Cruisin North Dakota and Freakin’ N Tweakin.’ Keep your ears peeled too for the monkey’s favourite the party-starting Bonsai Kicker and avail yourself of a copy below in a mutantly beneficial transaction for yourselves and Tones.
(Out now HERE)