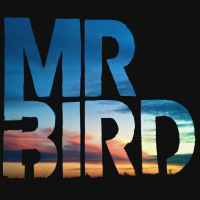 A lot of musicians suffer for their art. In Mr Bird‘s case one can only sympathise at all the dreamy summer afternoons and chilled evenings in southern European bars he must have had to endure in order to produce Bird Bird Bird. Formerly a resident of the United Kingdom, Bird has latterly moved to Lisbon and the mind really does boggle at the kind of devotion to one’s craft necessary in order to forgo the bracing cold and comforting patter of near continual rain in favour of the climatic privation of Portugal. Nevertheless, this is precisely what has happened.

Even a cursory preview of this album reveals how the sun and balmy nights have infused Mr Bird’s music. Listeners can expect thirteen cuts of funk, soul, latin, dnb, jazz and reggae-flavoured breakbeat electronica punctuated occasionally with vocal samples – a fair few of which are of the word ‘bird.’ Well, what would you do if Mr Bird was your handle?

Although mainly instrumental, the album does include one Bird song (thank you, I’m here all week) featuring the honeyed vocal charms of Adria Nicole on soul jazzy vocal cut Wanna Be Good. Jazz Pirate glides by on a kind of floaty dnb-ish tip, Ratface dives and wheels to a latin rhythm and Tear It Up has the spirit of early DJ Shadow firmly clasped in its talons. To really get your birdy nam nams though – you want to be checking the funky horns of Cenora Com Noz (or possibly Cenoura Com Noz) which apparently means ‘Carrot walnut.’ No me either. But you won’t care when the ska rhythms kick in about a third of the way through.
(Out 1 February 2013 on Vital Force)