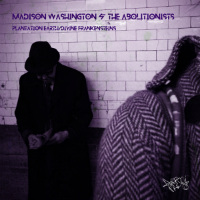 It’s posse cut time as Paris/ Brooklyn/ Oakland trio The Abolitionists join Madison Washington’s Malik Ameer to lay it down on the mic for Plantation Earth. And what better way to lyrically explore the idea that the entire planet is no better than a giant version of an ante-bellum cotton plantation than over funky drum breaks drenched in jazzy Rhodes chords. Nor is that the end of the guest spots either as Ameer and producer thatmanmunkz invite Nicole Goodwin aboard to deliver a spoken word outro on the more off-kilter and intense Divine Frankensteins. By the monkey’s reckoning, this is the fourth single to be taken from debut LP Facts and once again makes powerful use of vintage footage on the videos. The Plantation Earth one shows big love to the ‘angry young man of Hollywood’, Rod Serling, while the one for Divine Frankensteins critiques racism in entertainment with vintage footage of Afro-American performers.
(Out now on Def Presse)

Posted on 18th February 2019 no comments