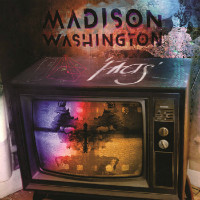 Producer thatmanmonkz’ other hip-hop project apart from Pan Amsterdam is, of course, Madison Washington, along with rapper Malik, and the duo return today with a new single, Facts. Actually, more strictly speaking, it’s ((((Facts)))) but either way, there’s an accompanying video in in which they take a hefty swipe at the man. Well, it’s not like he doesn’t deserve it. And so it is that Malik spits venom over relentless rock guitar-laced boom-bap and whooping sirens about all those Facts that get lost or doubted amid a welter of fake news or hit with a D notice or branded paranoia. Until, a leak gets into the press. But how to represent such antics via an audio-visual medium? What about some stock 60s footage of straight people in offices wearing shit-eating grins, intercut with CCTV footage of latter-day micro-serfs utterly losing it with keyboards, computers and their fellow microserfs. I reckon that should do it!