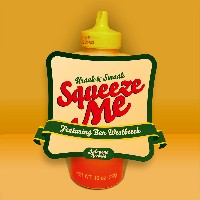 Jalapeno Records scores another hit scouring their back catalog for stuff to release on 45 for the first time and for the second time this year it’s old Kraak & Smaak material they use. Both tracks on the release are lifted from 2008’s Plastic People LP – the A-side being funky breakbeat-powered, Ben Westbeech-featuring banger Squeeze Me. Turns out that, back in the day, the track was championed by both Kanye West and Perez Hilton. On the other side, is the filthy 80s-influenced synth-funk-boogie-disco of Bobby & Whitney a name suggesting it was presumably inspired by the early 90s most R&B marriage and, appropriately enough, conjures images of cocaine-fuelled bad behaviour.
(Out now on Jalapeno Records)