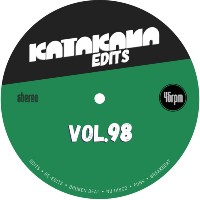 MB regulars will know that nary a month goes by without a release from the super-prolific Morlack and equally that rarely do more than a few of the equally prolific Katakana Edits volumes come out without Morlack having provided the music. By happy coincidence, it seems that by the time the Katakana crew got around to planning Vol. 98 (yes, 98!) Morlack had more than enough edits material to fill an album and so it is that the latest Katakana Edits drop is a thirteen-strong set of loosely disco-based booties – Morlack’s tenth LP, no less.

Material-wise, you’ve got your spacey disco, for example, in the form of a beat-heavy edit of Supermax’s 1977 cut Love Machine and your funky disco in the form of a beat-heavy edit of Bumblebee’s Funk For Days – also from 1977. Then there’s a trio of poppier reworks with a slo-mo Latin-disco re-work of David Koven’s Samba Maria while Isabelle Adjani’s Gainsbourg-produced Beau Oui Comme Bowie and Eddy Grant’s California Style get extra beats and other touches. More Latin disco comes in the form of Merengue and make sure you look out for the uptempo broken-beat take on The Cure’s Love Cats. Morlack then – he’s got beats to go.
(Out now on Katakana Edits)