HANNAH WILLIAMS & THE TASTEMAKERS: A Hill Of Feathers (2012) 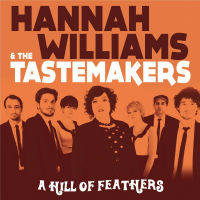 If getting mainstream recognition in a genre that was last cutting edge forty-odd years ago is climbing ‘a hill of feathers’ then I reckon relative newbies on the global funk and soul scene, Hannah Williams & The Tastemakers (featuring one Jimi Needles as drummer), are making excellent time to the summit. Why? Because debut LP A Hill Of Feathers has the potential to catapult them ahead of most of their rivals.

There’s not much doubt that A Hill Of Feathers will be highly regarded on the funk and soul scene – rapturous early soundbites would certainly suggest so – but then so are lots of funk and soul releases. The thing is, it’s arguably only Sharon Jones & The Dap Kings who are actually much known outside of the funk and soul scene with Lee Fields, The Bamboos and Quantic lurking somewhere beyond that on the edge of general recognition. If A Hill Of Feathers does see them leap-frogging most of the competition to the edge of the limelight to join these latter three, it’ll be because of three main reasons. Firstly, there’s the mighty, smoky-edged pipes of Hannah Williams – imagine Adele (no, I can’t stand the MOR shite either but you can’t deny the voice) singing sixties soul torch songs and funky soul and you get the idea. Secondly the mixing of the LP – courtesy of one Diesler – and thirdly the mixture of soul-bluesy torch songs and funky soul cuts.

Surprisingly – there’s almost as many of the torch songs as there are those with dancefloor potential – not really an approach taken by anyone else on the scene in recent years except, interestingly, scene-titans Sharon Jones & The Dap Kings. In fact the album kicks off with two of these including current single Work It Out. The best one turns up a bit later however, the huge soul-blues Washed Up – which has ‘mainstream crossover’ written all over it. Nowhere on the LP shows off Williams’ voice better than this – and it will appeal not only to those of the soul persuasion but potentially to a much wider audience who dig anything from Portishead to – well – I hate to say it again – but – Adele. Not that the band don’t like to get down too. Kitchen Strut is an lively horns-led shuffle, Don’t Tell Me is a slinky funk workout and I’m A Good Woman does a respectable job with Barbara Lynn’s classic northern soul stomper.

Now I’m all about dancefloor soul but it’s the slowies that loom large on this and I predict that’s what’ll get the band biggest attention. The fact that they released Work It Out as the first single would suggest they’ve already got this sussed and I wouldn’t be surprised if this turns out to be label Record Kicks’ biggest drop to date. One to watch…
(Out 15 October on Record Kicks)

LISTEN to Hannah Williams & The Tastemakers – A Hill Of Feathers HERE

Posted on 23rd September 2012 no comments