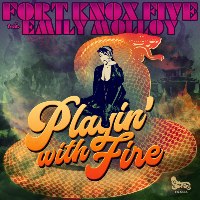 Despite (and, to some extent, perhaps because of) Covid, DC’s Fort Knox Five keep the creative flames alight on new single Playin’ With Fire featuring Emily Molloy.  A steady 96 bpm chugger, the track has the bedrock of a nineties hip-hop beat adorned with seventies funky guitar picking and horns providing the perfect musical accompaniment for Emily Molloy’s by turns sweet and raucous vocal.   Turns out it took a while to make this one though.  After years of the band and Malloy talking about working together, it took Covid pinning enough people down for lockdown in the same location to get a vocal recorded.  The problem then was that with the various FK5 band members  dispersed between Molloy’s base of Vancouver and the band’s base of Washington DC co-production was having to take place over the ether.  As you can hear though, such problems were happily surmounted without anyone getting their fingers burned.
(Out now on Fort Knox Recordings)