FOLD vs MOTORMOUF: Stronger Than The Evils – audio premiere 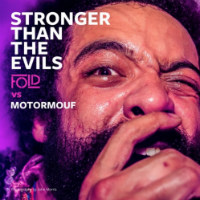 After a year-long hiatus, Fold return in the company of Nottingham MC and beatboxing champ Motormouf with a new single – Stronger Than The Evils. What evils? You mean the death stare that Vicky Pollard gets given a lot on in Little Britain? No, you moron! As in the multifarious evils of modern Britain – you know – corporate tax evasion, continued banking scandals, secret lobbying of Parliament, transference of state social housing to private landlords, systemic racism, phone-hacking by scumbag newspapers…alright, they’re not that specific, but that’s the vibe. And what better way to rail against these than with a funky-edged hip-hop rhythm, laced with ominous synth horns and vocal samples and featuring the blistering staccato lyrics and beatbox work of Motormouf. Altogether now, the power of the people is much stronger than the evils!
(Out 22 February on FoldFM)