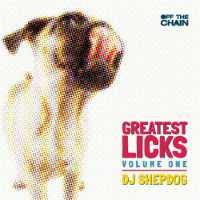 Back in the day (well, up until about four years ago anyway) the reggae-hip-hop mash-up scene was pretty much sewn up by three men: DJs Shepdog, JStar and Mr Benn of the Nice Up! crew. Indeed, Shepdog and JStar released two epic sets of such bootlegs (Cut Ups, Bruck Ups & Muck Ups Vols. 1 and 2) before pretty much bowing out of making anything else along these lines. In the meantime any number of producers stepped up to the plate to fill the void and happily there remains a steady supply of good reggae/ hip-hop mash-ups from the likes of Maars and Djtzinas. Just in case you missed the Cut Ups volumes though, here now is your chance to get your hands on the massive contributions of one of the grandaddies of the reggae/hip-hop mash-up scene (Deelite, Skee-Lo, Beth Ditto, MIA, Gorillaz and Nas on reggae beats! Damian Marley and Cutty Ranks on hip-hop beats! Plus Biggie on a – er – hip-hop beat – that of Roots Manuva’s Witness 1 Hope)…all free! Nice up the dance! And this is just Vol. 1. Good lord is our man coming out of mash-up retirement or is there another album’s worth of stuff in the vaults that’s yet to see the light of day?!