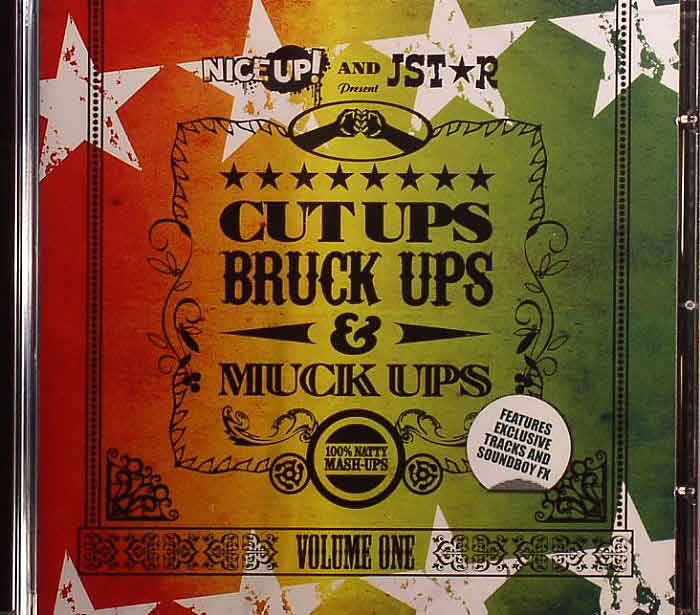 (Read monkeyboxing.com review of Cut Ups, Bruck Ups & Muck Ups Vol. 2 HERE
Ah the mashup – refuge of the lazy DJ/ Producer or inspirational genius? It all depends on whose doing it and what the outcome is like. In the case of J Star and Nice Up DJs Shepdog and (on one track) Moodie, it’s the latter. Those who keep their eyes glued to the relevant new release pages of their favourite online record stores may well recognise the greater portion of the cuts on offer here from successive 7 and 12” releases over the last few years and if they possess a pulse will probably have snapped up a lot of them. They’ll also be familiar with the recipe. Take one classic vocal stem (usually off a hip-hop track but possibly off a dancehall or decent pop track) and graft onto the instrumental of another (usually a rocksteady or reggae track but sometimes a hip-hop track) always obeying the rule that the one does not come from the same genre as the other.
Thus we have Skankin’ In The Way of Control with Gossip singer Beth Ditto getting a rocksteady workover, as does Nas’ The Virgo and shortarse rapper Skee Lo’s I Wish. Craig Mack’s posse-cut Flava In Your Ear also gets a piggyback from Root’s Manuva’s Witness 1 Hope and Damien Marley gets to sing Welcome To Jamrock over Dead Prez’ Bigger Than Hip Hop. The collection also includes No Diggedy – basically Black Street’s No Diggity astride a reggae rhythm – J Star’s four year old grenade that really blew up the reggae/ hip-hop mash-up sound in a big way. There are a couple of exclusive new tracks (including Limb By Limb – Cutty Ranks on vocals and DJ Premier on beats anyone?) presumably to entice those who actually bought the vinyl singles though, naturally, there isn’t room on here to include the entirety of the J Star/ Nice Up back catalogues. Still, the Vol. 1 tag on the end of the title is promising and I sense a volume 2 in the offing. Oh yeah – and you get 14 sound effects including sirens, reggae toaster vocal drops and that 70s arcade game thing that (appropriately enough) sounds like a bomb dropping. Hear me now!