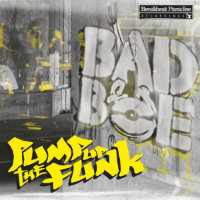 Badboe‘s Pump Up The Funk is number three then – full-length ghetto funk albums of original material this year that is, hot on the heels of big LPs by CMC & Silenta and Featurecast in the autumn. Now, though, it’s the turn of the man who arguably released the first one – back when ‘ghetto funk’ was a term being used by the Guardian to describe Diplo and MIA (no, really) – or at least not long after – when anything involving funk and breaks was still ‘nu-funk’ and anything involving funk and breaks and bass wobble was pretty much just A Skillz’ Insane Bangers crew. Anyway – the first time around Badboe was busy breaking the funk (2009’s Break The Funk); this time around he’s clearly fixed it, since it’s pumping like a bastard.

Of course, in the three years since Break The Funk there’s been a lot of wobble under the bridge and Pump Up The Funk doesn’t hesitate to inflate the breaks with snarling synth bass as the occasion demands it – which seems to be quite a lot these days, and a fair bit on this. Badboe doesn’t forget his roots though either, plumping for well-judged soul-funk samples from Jr Walker, Ripple and The Isley Brothers (among others), as well Johnny Nash’s reggae version of Cupid (Draw Back Your Bow) for the MC Coppa-featuring former reggae/hip-hop single and album highlight One Of Those Days.

Aside from the funk, hip-hop and reggae influences, disco is one presence which makes itself felt in the second half of the LP at times pervading a number of tracks – though never more obviously than Sweet Games. Another presence that most definitely also makes itself felt on here is the swing, on the other big album highlight – swing-breaks cut Hit It Maestro featuring MC Rayna. Here, Badboe finds himself in A Skillz’ Tip Up Your Cup territory and damn if he doesn’t seem right at home. Should this fail to make it onto vinyl single as a release – I’m not sure I’ll be answerable for my actions.

Arguably phatter than CMC & Silenta’s album and more old school than either that or Featurecast’s full-length, Pump Up The Funk is business all the way through and Badboe’s business is parties. This one rocks. Don’t go looking for the chill-out track.

Posted on 9th December 2012 no comments