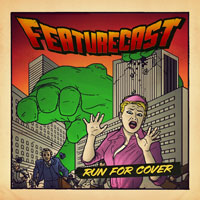 Featurecast finally delivers a full-length album – Run For Cover and it’s a bit of a game changer for the genre known as ‘ghetto funk.’ Now, you might have reservations about a term which has been appropriated by a scene producing a frequently bass wobble-obsessed, latterday descendant of nineties big beat which also has the hots for funk, disco and hip-hop and isn’t averse to getting into bed with reggae, drum n bass, dubstep or the ridiculously named moombahton. You might take issue with the fact that most of it is largely made outside of any actual – well – ghetto, for example. Or that occasionally it isn’t particularly funky. Or indeed that some of it is rather cheesy. But while Lee ‘Featurecast’ Mintram’s Southampton base isn’t especially ghetto (at least not last time I was there), this is funky and far from cheesy. And rather excellent. Not only that, but it comes at a time when the genre is on the cusp of mainstream recognition and this just might be the release that tips the scales.

For a start, the timing is perfect. Run For Cover swells the vast ranks of those who have released a full length ‘ghetto funk’ album to date and who now number (if my memory serves me correctly) a massive three. Not that Basement Freaks or Morlack‘s last LPs (both of which dropped since the inception of the Ghetto Funk label) were slouchy efforts – nor Badboe’s Break The Funk, which gets an honourable mention, despite belonging to the pre-bass-wobble days/ pre-ghetto-funk blog/label days, because of his role in the scene. It’s also just that interest in the genre has grown exponentially since those releases – and it’s on a hair trigger to blow up like ‘big beat’ did back in ’95/’96. This just might be the ghetto funk equivalent of the first Chemical Brothers or Monkey Mafia albums.

While sampling is involved (you can hear a bar of the evergreen Champ on Soul Children, for example), Run For Cover is all original compositions as opposed to the many remixes and mash-ups which constitute many ‘ghetto funk’ singles – including numerous of Featurecast’s own. What’s new here is the number of original vocal collaborations and the status of the collaborators themselves who include several other rising stars – among them Greg Blackman (who appears on three tracks) and John Turrell of Smoove & Turrell fame. You also get Farina Miss on excellent recent single Ego Tripping and Pat Fulgoni. Then of course there are the rappers.

Ghetto funk producers have rinsed the life out of no end of old rapappellas in the last few years and it’s a wonder no one’s really hooked up with any decent emcees. Until now. Easily the mightiest of these tracks on the LP is opener Got That Fire (Oh La Ha) featuring Chicago’s Pugs Atomz. Here is a track which provides the best idea I’ve yet heard of how a thoroughly modern descendant of the music that started with Kool Herc might sound in 2012 that doesn’t involve a euro-house beat. Also present are Alaska MC, Dynamic, C Reid on Around The Block, Jump and What’s Good – any one of which are party starters.

Just in case you were wondering, it’s not just nods to hip-hop on the album. This is a creature that straddles multiple generic bases and you’ll find drum n bass represented a couple of times as well as digital ghetto funky updates of soul and funk in the shape of Ain’t My Style (the slick 80s soul referencing first single off the album), the Prince-ish Soul Children and Evil Eye (digital northern soul) and the ghetto soul-jazzy Get Lovely.

The timing’s right, the production’s tight and this has got mainstream appeal. No pressure at all then. Players below.
(Out 17 September 2012 on Jalapeno Records. Or today at juno.co.uk – depending on your source.)