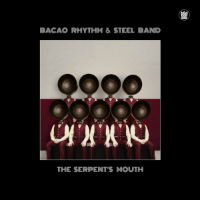 Turns out it’s been two years since Bacao Rhythm & Steel Band’s heavy-hitting debut 55 on Big Crown Records so it’s not really surprising that the follow-up is here already. Of course, if the band were following the traditional pattern of releases then new long player, The Serpent’s Mouth, would provide us with similar thrills to LP number one with perhaps a bit of the shine worn off due to familiarity. Then again, Bjorn Wagner’s Hamburg-based steel drum funksters have repeatedly defied all manner of convention. And far from sunning themselves in say, Trinidad, with their feet up for the last two years, they’ve been honing their recording techniques. Perhaps we’d better take a closer look at how things have panned-out (thank you, I’m here all week) on The Serpent’s Mouth using the occasional track-by-track analysis method that the monkey shamelessly stole from – er – somewhere else…

1. XXPLOSIVE
Arguably more mellow than Dre’s original (since steel-pans don’t hold forth about chronic, bitches and hoes) but precisely the right amount of understated dynamite to kick things off…

2. TOUCHDOWN
…followed by the equally enticing swirling synth-n-pans of the atmospheric first original.

5. HOOLA-HOOP
…as is this total banger: fat drum breaks, flutes, steel pans – a b-boy’s dream. This better be on a 45 single at some point as it’s one of the best cuts on the LP…

6. CROCKETT THEME
…as is this cover. That should actually be Crockett‘s Theme of course, but since this is better than Jan Hammer’s original, we’ll ignore the lack of the genitive. And if this doesn’t make it onto 45 – well – it’ll be political correctness gone mad. Or something.

7. 1 THING
Strong version of the Amerie banger, but despite what you’ll hear, neither the best cut nor the best cover on the LP – see above.

8. GREAT TO BE HERE
Super nice take on the Jackson 5 cut – and the second best cover…

9. BOCAS DEL DRAGON
…but again a big cover is bettered by an even better original with this Latin-themed epic. Not convinced? Wait until the first chorus kicks in!

10. ALL FOR THE CASH
Sinuous versioning of the Gang Starr joint that rocks the spot nicely…

13. I LOVE YOU
…a bit of blaxploitation gone steel pan…

14. THE SERPENT’S MOUTH
…and then it’s all about the lowkey finish with some moody cinematic steel pan soul.

COMMENTS: Outrageous – this is even better than the first one! Once again a mix of originals and covers and, once again, the covers are inspired though this time the originals wow just as much and at least as often. It’s all dancefloor fangs and subtle sonic venom and will have those who sample positively slavering. What more could you want from a record? Let’s hope Big Crown don’t forget to put out more 45s featuring the best dancefloor originals as well as the obvious crowd-pleasing covers.

Posted on 15th September 2018 no comments