B SIDE RECORDS: Vinyl records store opens in Newbury! 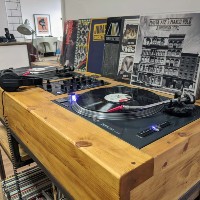 If you thought the underground vinyl record store was dead, think again – in Newbury at least – where B Side Records has just opened. Twenty years ago this wouldn’t have been all that remarkable – vinyl for DJing was still going strong even if it was largely dead on its feet as a play-at-home medium. Suddenly though, as we clicked into the mid-noughties, record shops were toppling like ninepins. The likes of Fopp and a few larger independents stepped in to pick up the vinyl banner – along with – er – supermarkets – except that what they were selling mostly wasn’t for the few DJs still playing wax and only offered the same limited range of re-pressed LPs by the usual suspects for hipsters who suddenly decided they had a pressing (thank you, I’m here all week) need for Led Zeppelin III, Sgt Pepper’s… or Innervisions on LP. And so that market kind of plateaued. Except that then, seemingly from out of nowhere, the 45 began to make what has become a massive resurgence as both a DJ and home listening format. Cue (pun intended), a growing number of a new generation of independent record stores – one of which is B-Side Records.

Born out of a vision of a combined barbers and record store, the project was originally inspired by the presence of a pair of decks and some old wax for sale in Bristol’s Shotgun Barbers. Fast forward to the second half of last year and B-Side Barbers was established, followed six months later by the record store. This part of the operation is currently building up stock of both new releases and re-issues with the ultimate plan of selling used records, turntables, stylii, vinyl cleaning accessories and the like.  They’re also keen to make contact with other local indie companies – especially record labels and the like – if that’s you – give ’em a shout. B Side Records in Newbury then – now you can get on the cut, while you get a cut! 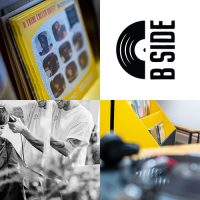